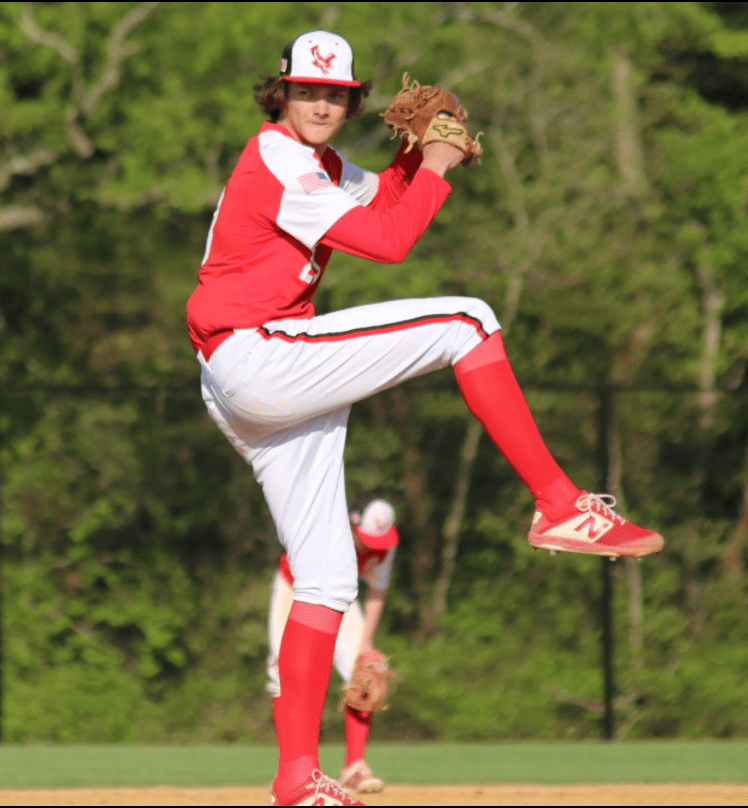 DESPITE having a final season cancelled and a senior year of high school disrupted, Jake McKenna came out on top. The recent Ocean City High School graduate is going to pros, having signed with the Philadelphia Phillies in July. Jake, a lifelong baseball fan, is more than excited to be on the fast track towards his life’s dream of pitching for his family’s favorite team.

How long have you played baseball? What got you into playing?

I played tee ball when I was three or four. My dad loves baseball, so I had to give it a try.

Who was your favorite Phillies player back then?

Are you looking forward to working with any specific players?

Aaron Nola, the starting pitcher. I want to learn his work ethic and pretty much anything about the knowledge he has about pitching and the game. I have a lot to learn and I am excited to dive in head first and get after it.

What has your baseball career been like so far?

I have always had fun playing baseball, going to the field to play with my teammates. I was a closer for Ocean City. My fastball is high 80s mph to low 90s mph, my change up and my curve ball are both 75 mph.

What are some important aspects of a pitcher’s job?

To be strong mentally. To be able to keep your composure under any situation. To outsmart the hitter with certain pitches and be a good teammate. You cannot be a good pitcher if you do not have your defense behind you.

How do you balance high school with the intense level of athletics and training?

It was definitely tough. Right after practice I would go right to the Baseball Performance Center in Pleasantville to train. Then I would go home to do all of my homework and go right to bed. There was not much free time but it was worth it.

How did you get the attention of the Phillies recruiter?

He saw me throwing in a tournament in Jupiter, Florida and kept seeing me at different showcases. The interest level on his end just never went down.

What did you do to distinguish yourself from the competition?

I think just my height – I am 6’7” – and being a leftie. Then just being able to throw just as hard as the other guys. Teams like lefties because they are not as common.

What are the next steps for you?

[The Phillies] are not sure right now because of the coronavirus. They are hoping in the fall to bring us down to Clearwater, Florida for an instructional league. If that does not work we will just wait for Spring Training in March.

What would you do if you have to wait until March?

Just go down to the Performance Center and just keep training. That’s all I can do.

Before signing with the Phillies you were previously committed to Saint Joseph University. Do you have plans for future schooling?

The Phillies said they would match the tuition of Saint Joe’s for any college I wanted to go to. That money is good until five years after I retire, but I can use it whenever I want. That was a game changer. I was thinking about taking classes at Atlantic Cape Community College this winter, just to get a head start.

What was the deciding factor to go pro instead of college?

What was going through you and your family’s minds when the Phillies called you?

It was crazy because we’ve been fans our whole lives; we’ve always been season ticket holders.

Is there a certain speed you are training to throw?

I am working towards 95, but one day I want to throw 100 miles per hour. It is definitely a bigger jump than it seems. When I was younger jumping from low to high 80s was not crazy, but the difference between 80s and 90s is definitely something.

What are your pre-game routines?

When I throw I always use J bands. I go for a run, I stretch. Pretty basic things. I stay away from rituals because if I cannot for example, have something specific for breakfast it completely messes up my whole day.

Do you have a pump-up song?

I listen to EDM before I throw. Anything loud with big base drums.

What did your high school coach Andrew Bristol teach you?

He was a big influence on how to be teammate and a class act. He taught me how to have a presence on the field.

How have your teammates reacted to you being signed?

They were super excited, super happy for me. I have some awesome teammates.

What did you do to stay in shape during quarantine?

My friend Dan [Nunan], his brother Matt, my friend Sean and I went to any field we could. We would throw on our own and do kettle bell workouts.

We interviewed Dan Nunan a few years back. Has he helped you get ready for the pros?

He definitely taught me how to work hard and what it takes to be a pro guy. He has helped me a lot with nutrition.

What is your favorite place to eat in Ocean City?

Rojos before school. I would always get the fish burrito; I love that.

What was the best aspect of going to school in Ocean City?

The teachers. Looking back I honestly did not have one bad teacher.

We walking down the Boardwalk and down the street, our parents could all see us. Taking all the pictures, it was a good time. I did not think it would be as good as it was. They could not have done it a better way.

Are you a Philly pretzel or cheesesteak guy?

I love cheesesteaks. I used to get American, but I am starting with the wiz.