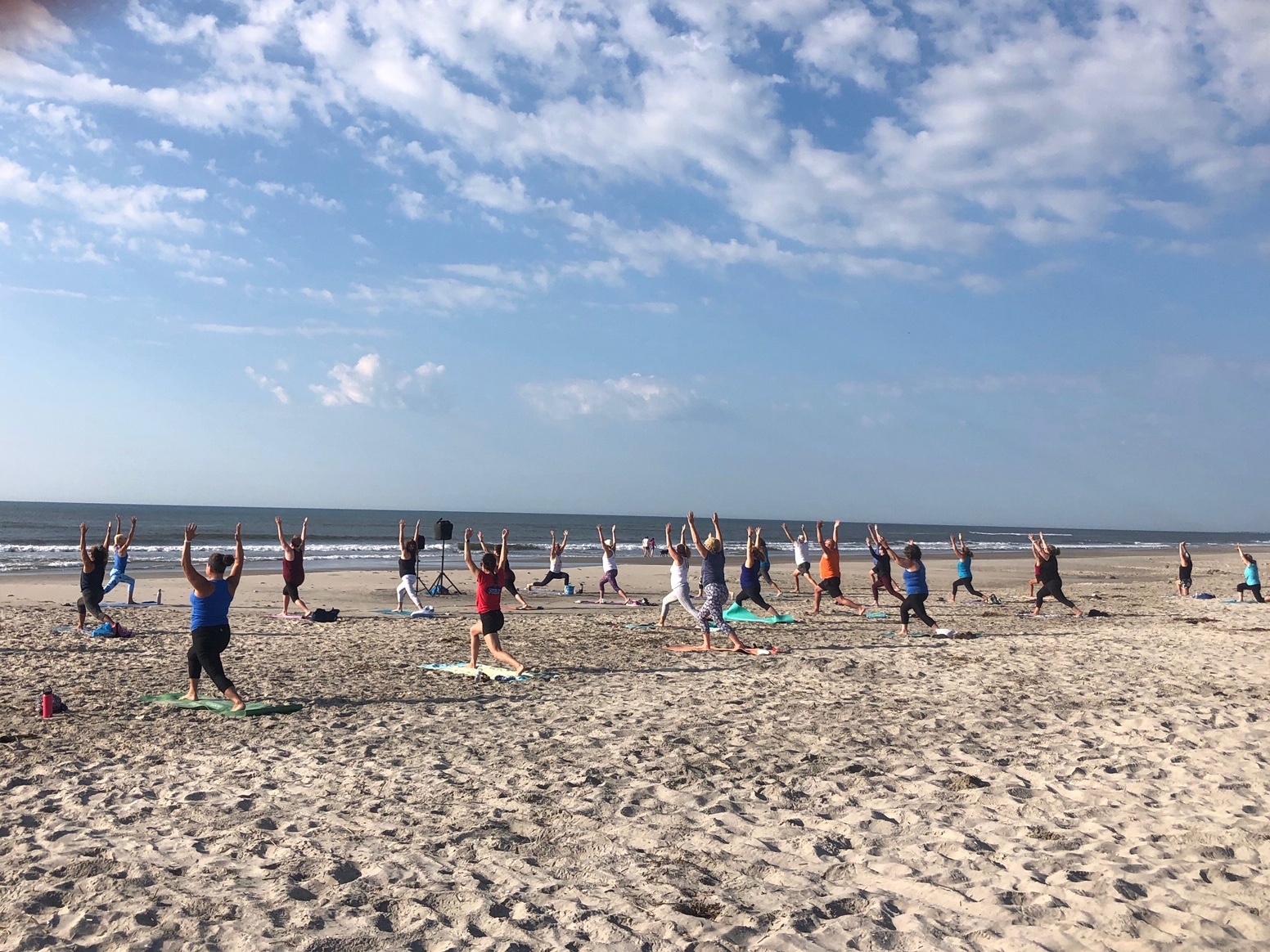 Outdoor fitness in Ocean City and Sea Isle is becoming more prevalent due to COVID-19 restrictions. Business owners are trying to make the best of it, including Suzanne Chew, owner of Yoga Ginger, 717 Asbury Ave. Ocean City.

“This is why we practice. We practice because change is inevitable; there’s no wave alike. I feel very lucky; very blessed that I can still do what I do.”

Suzanne is offering classes Mondays, Wednesdays, Fridays, Saturdays, and two classes on Sundays at Seaspray Beach. She admits that it was a transition, especially with finding the right equipment so that everyone could hear her, but has enjoyed the experience. She hadn’t consistently offered beach classes before. She had to get approval from the city before she started teaching outdoors.

“It’s less intimidating going to the beach than to the studio. The beach is more of an experience.”

Suzanne has been making sure that her yogis don’t feel complacent. She varies where on the beach she holds the classes; what direction she has her yogis facing.

“You can practice yoga anytime, any place,” she says.

Owner Teri O’ Connor has also dealt with physical changes to her typical practicing space. Usually, she teaches at the beach on JFK in Sea Isle City. This year, she was forced to move because of beach replenishment to 5th St.

“Our motto is ‘Ride rather than resist the wave,’” Teri said.

NJ Beach Yoga typically has beach classes on Mondays, Wednesdays, and Fridays at 7:30 a.m. This year there are two classes- 7:30 a.m. and 8:45 a.m, capped at 50 participants who cannot register the same day as the class. Towels have to be placed at least six feet apart. They have to fill out the usual liability waiver as well as a COVID-19 symptom screening. This year, they are also cashless. Teri is trying to keep her staff and participants safe as well as comfortable.

“You don’t have to practice with a mask but can’t do a check-in without it.”

“It’s tricker this year. People are overall stressed. There’s a lot of new ways to do things but people are overwhelmingly grateful. People know it’s not a guarantee that we’re able to be there everyday.”

“Unfortunately Sea Isle City and Ocean City do not have adequate or a safe place to do it,” says Chris.

“All four of our locations are open and are doing one on one training and curbside pickup for nutrition products and clothing, which is a big seller.”

According to owner Lorelle Cicitta of Forza Fitness, 3514 Landis Avenue, Suite 101,  Sea Isle City, they are taking a new approach this summer- holding classes outside, place to be announced.

They hope to start classes within the next few weeks and possibly hold three classes a week. Their schedule will be made available on their website. They are also undergoing another change- moving out of their studio.

“We are choosing to leave our studio with no clarity from our governor (on reopening plans). We’ve been operating online prior to the pandemic. It’s going to be a smoother transition than opening up for one on one,” says Lorelle.

If you’d rather be on the water, try a paddleboard class at Ocean City Paddle Company, located at 10th and the bay. They will be offering a variety of paddle classes.